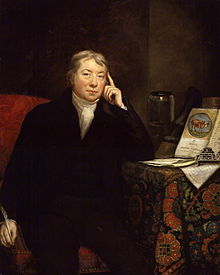 Edward Anthony Jenner, FRS was an English physician and scientist from Berkeley, Gloucestershire, who was the pioneer of smallpox vaccine.He is often called “the father of immunology”, and his work is said to have “saved more lives than the work of any other man”.

Edward Jenner was born on 17 May 1749 (6 May Old Style) in Berkeley, as the eighth of nine children. His father, the Reverend Stephen Jenner, was the vicar of Berkeley, so Jenner received a strong basic education.

Edward Jenner went to school in Wotton-under-Edge and Cirencester.During this time he was inoculated for smallpox, which had a lifelong effect upon his general health.At the age of 14 he was apprenticed for seven years to Mr Daniel Ludlow, a surgeon of Chipping Sodbury, South Gloucestershire, where he gained most of the experience needed to become a surgeon himself.

In 1770, Edward Jenner became apprenticed in surgery and anatomy under surgeon John Hunter and others at St George’s Hospital. William Osler records that Hunter gave Jenner William Harvey’s advice, very famous in medical circles (and characteristic of the Age of Enlightenment), “Don’t think; try.”Hunter remained in correspondence with Jenner over natural history and proposed him for the Royal Society. Returning to his native countryside by 1773, Jenner became a successful family doctor and surgeon, practicing on dedicated premises at Berkeley.

Jenner and others formed the Fleece Medical Society or Gloucestershire Medical Society, so called because it met in the parlor of the Fleece Inn, Rodborough, in Rodborough, Gloucestershire, meeting to dine together and read papers on medical subjects. Jenner contributed papers on angina pectoris, ophthalmia, and cardiac valvular disease and commented on cowpox. He also belonged to a similar society that met in Alveston, near Bristol.