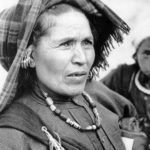 On 26th March 1974 , Gaura Devi with just 27 Women and young girls standing in front of the trees that had been marked for felling, addressed the Forest officials and lumbermen , “Brothers! This forest is the source of our livelihood. If you destroy it, the mountain will come tumbling down onto our village.” Unfortunately exactly that happened on 17th of June 2013. The mountains came tumbling down in Uttarakhand and with it destroyed everything that came in its way.

In the foot hills of Himalayas in a small remote village in 1925, Gaura Devi was born into the family of wool traders. As a small girl , she would accompany her her mother to gather broken branches and twigs for fire at home, to cook and to keep themselves warm.

Once while collecting the twigs with her mother , she wondered , why they couldn’t cut a big tree then they would not have to collect twigs every day. She was eight years old then. Her mother had replied, “The roots of the trees are like hands. They hold the earth to the side of the mountain. They also hold the water from the big rains and from the melting snow. If anyone ever cuts down our brothers and sisters, our village will be washed away.” This left a deep impact on her mind. She vowed to take care of the trees and always called them brothers and sisters , who protected the people of Gharwal and the Himalayan region.

Later she was married at a young age, had a son and became a widow at the age of 22. However, she was a strong lady and was elected as the president of Mahila Mangala Dal ” Women’s Welfare Association “. In seventies the felling of trees had started on large scale and people in the mountain region had become alert to the danger posed by excess felling of trees. ” Chipko movement ” a non -violent style of protest, where people hugged the trees from all sides to prevent it from being chopped .

26th march 1974 is known as the historical day in Chipko Movement . In a small village of Reni in Uttarakhand , all the women under the leadership of Smt.Gaura Devi stood vigilant for three days and nights to prevent the lumbermen from felling the trees. Women in the village were alone that day as all the men had gone to near by Chamoli Village for work. The forest officials accompanied by labourers wanted to chop the trees during this period as they thought, there would be no resistance as the men had gone to Chamoli for work . They had failed to reckon the women power . Gaura Devi stood before them and said, “We are hugging the trees. If you cut the trees down, you will have to hit us with your axes first.” Officials and labourers had to relent and go away. It was a great victory for the Chipko movement .

People of Uttarakhand have forgotten the the words of Gaura Devi, who died in 1991 at the age of 66 years. With her died the resistance against felling of trees in the Gharwal region. Uneducated villagers understood the value of trees but educated city borne officials and politicians have no respect for nature. They have been mindless in their development schemes. Unsuspecting innocent paid for it with their lives.

Narendra Singh Negi is one of the most prominent folk singers of the Garhwal region of Uttarakhand. In Uttarkhand... read more

Psychology comes into play when coping with gamblers and their cash. By coping with chips as a substitute of... read more