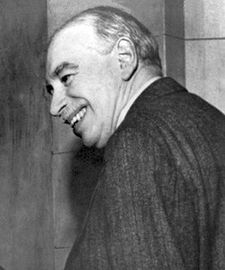 John Maynard Keynes,was a British economist whose ideas have fundamentally affected the theory and practice of modern macroeconomics, and informed the economic policies of governments. He built on and greatly refined earlier work on the causes of business cycles, and is widely considered to be one of the founders of modern macroeconomics and the most influential economist of the 20th century.His ideas are the basis for the school of thought known as Keynesian economics, and its various offshoots.

In the 1930s, Keynes spearheaded a revolution in economic thinking, overturning the older ideas of neoclassical economics that held that free markets would, in the short to medium term, automatically provide full employment, as long as workers were flexible in their wage demands. Keynes instead argued that aggregate demand determined the overall level of economic activity, and that inadequate aggregate demand could lead to prolonged periods of high unemployment. According to Keynesian economics, state intervention was necessary to moderate “boom and bust” cycles of economic activity.He advocated the use of fiscal and monetary measures to mitigate the adverse effects of economic recessions and depressions. Following the outbreak of World War II, Keynes’s ideas concerning economic policy were adopted by leading Western economies. In 1942, Keynes was awarded a hereditary peerage as Baron Keynes of Tilton in the County of Sussex.Keynes died in 1946, but during the 1950s and 1960s the success of Keynesian economics resulted in almost all capitalist governments adopting its policy recommendations.

Keynes’s influence waned in the 1970s, partly as a result of problems that began to afflict the Anglo American economies from the start of the decade, and partly because of critiques from Milton Friedman and other economists who were pessimistic about the ability of governments to regulate the business cycle with fiscal policy.However, the advent of the global financial crisis of 2007 to 08 caused a resurgence in Keynesian thought. Keynesian economics provided the theoretical underpinning for economic policies undertaken in response to the crisis by President George W. Bush of the United States, Prime Minister Gordon Brown of the United Kingdom, and other heads of governments.

In 1999, Time magazine included Keynes in their list of the 100 most important and influential people of the 20th century, commenting that: “His radical idea that governments should spend money they don’t have may have saved capitalism.”He has been described by The Economist as “Britain’s most famous 20th century economist.”In addition to being an economist, Keynes was also a civil servant, a director of the Bank of England, a part of the Bloomsbury Group of intellectuals,a patron of the arts and an art collector, a director of the British Eugenics Society, an advisor to several charitable trusts, a successful private investor, a writer, a philosopher, and a farmer.

March 2, 1931 Gorbachev was born in Stavropol Krai into a peasant Ukrainian Russian family, and in his teens operated... read more