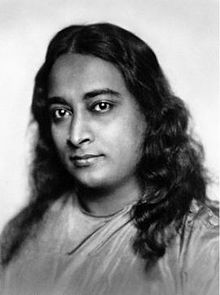 Yogananda was born in Gorakhpur, Uttar Pradesh, India to a devout family.According to his younger brother, Sananda, from his earliest years young Mukunda’s awareness and experience of the spiritual was far beyond the ordinary.In his youth he sought out many of India’s Hindu sages and saints, hoping to find an illuminated teacher to guide him in his spiritual quest.

Yogananda’s seeking after various saints mostly ended when he met his guru, Swami Yukteswar Giri, in 1910, at the age of 17. He describes his first meeting with Yukteswar as a rekindling of a relationship that had lasted for many lifetimes:

We entered a oneness of silence; words seemed the rankest superfluities. Eloquence flowed in soundless chant from heart of master to disciple. With an antenna of irrefragable insight I sensed that my guru knew God, and would lead me to Him. The obscuration of this life disappeared in a fragile dawn of prenatal memories. Dramatic time! Past, present, and future are its cycling scenes. This was not the first sun to find me at these holy feet!

Later on Yukteswar informed Yogananda that he had been sent to him by Mahavatar Babaji for a special purpose.

After passing his Intermediate Examination in Arts from the Scottish Church College, Calcutta, in June 1915, he graduated with a degree similar to a current day “Bachelor of Arts” or B.A. (which at the time was referred to as an A.B.), from the Serampore College, a constituent college of the University of Calcutta. This allowed him to spend time at Yukteswar’s ashram in Serampore. In 1915, he took formal vows into the monastic Swami Order and became ‘Swami Yogananda Giri’.In 1917, Yogananda founded a school for boys in Dihika, West Bengal that combined modern educational techniques with yoga training and spiritual ideals. A year later, the school relocated to Ranchi.This school would later become Yogoda Satsanga Society of India, the Indian branch of Yogananda’s American organization Self-Realization Fellowship.

January 6, 1966 Allah-Rakha Rahman is an Indian composer, singer-songwriter, music producer, musician, multi-instrumentalist and philanthropist.Described as the world’s most... read more

December 11, 1969 Anand became India’s first grandmaster in 1988. He was also the first recipient of the Rajiv Gandhi... read more