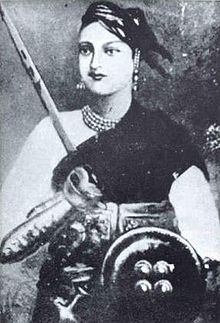 Lakshmibai,the Rani of Jhansi was the queen of the Maratha-ruled princely state of Jhansi, situated in the north-central part of India. She was one of the leading figures of the Indian Rebellion of 1857 and for Indian nationalists a symbol of resistance to the rule of the British East India Company in the subcontinent.
Lakshmibai was born probably on 19 November 1828 in the holy town of Varanasi into a Brahmin family. She was named Manikarnika and was nicknamed Manu. Her father was Moropant Tambe and her mother Bhagirathi Sapre (Bhagirathi Bai). Her parents came from Maharashtra. Her mother died when she was four. Her father worked for a court Peshwa of Bithoor district who brought Manikarnika up like his own daughter. The Peshwa called her “Chhabili”, which means “playful”. She was educated at home and was more independent in her childhood than others of her age; her studies included archery, horsemanship, and self-defence.

Manikarnika was married to the Maharaja of Jhansi, Raja Gangadhar Rao, in 1842,and was afterwards called Lakshmibai She gave birth to a boy named Damodar Rao in 1851, but when he was four months old he died. The Raja adopted a child called Anand Rao, the son of Gangadhar Rao’s cousin, who was renamed Damodar Rao, on the day before he died. The adoption was in the presence of the British political officer who was given a letter from the raja requesting that the child should be treated with kindness and that the government of Jhansi should be given to his widow for her lifetime. After the death of the raja in November 1853 because Damodar Rao was adopted, the British East India Company, under Governor-General Lord Dalhousie, applied the Doctrine of Lapse, rejecting Damodar Rao’s claim to the throne and annexing the state to its territories. In March 1854, Lakshmibai was given a pension of Rs. 60,000 and ordered to leave the palace and the fort.

Rani Lakshmibai was accustomed to ride on horseback accompanied by a small escort between the palace and the temple though sometimes she was carried by palanquin. Her horses included Sarangi, Pavan and Badal; according to tradition she rode Badal when escaping from the fort in 1858. The Rani Mahal, the palace of Rani Lakshmibai, has now been converted into a museum. It houses a collection of archaeological remains of the period between 9th and 12th centuries AD.

According to a memoir purporting to be by Damodar Rao he was among his mother’s troops and household at the battle of Gwalior; together with others who had survived the battle (some 60 retainers with 60 camels and 22 horses) he fled from the camp of Rao Sahib of Bithur and as the village people of Bundelkhand dared not aid them for fear of reprisals from the British they were forced to live in the forest and suffer many privations. After two years there were about 12 survivors and these together with another group of 24 they encountered sought the city of Jhalrapatan where there were yet more refugees from Jhansi. Damodar Rao surrendered himself to a British official and his memoir ends in May 1860 when he has been allowed a pension of Rs. 10,000, seven retainers only, and is in the guardianship of Munshi Dharmanarayan.

2 September 1950 Lakshmi Niwas Mittal is a London-based Indian steel magnate. He is the chairman and CEO of ArcelorMittal,... read more

April 24, 1973 Sachin Ramesh Tendulkar is an Indian former cricketer widely acknowledged as the greatest batsman of the modern... read more