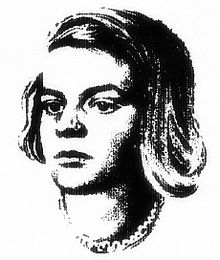 Scholl was brought up a Lutheran. She entered junior or grade school at the age of seven, learned easily, and had a carefree childhood. In 1930, the family moved to Ludwigsburg and then two years later to Ulm where her father had a business consulting office.

In 1932, Scholl started attending a secondary school for girls. At the age of twelve, she chose to join the Bund Deutscher Madel (League of German Girls), as did most of her classmates, but her initial enthusiasm gradually gave way to criticism. She was aware of the dissenting political views of her father, of friends, and also of some teachers. Political attitude had become an essential criterion in her choice of friends. The arrest of her brothers and friends in 1937 for participating in the German Youth Movement left a strong impression on her.

She had a talent for drawing and painting and for the first time came into contact with a few so-called “degenerate” artists. An avid reader, she developed a growing interest in philosophy and theology. Her firm Christian belief in God and in every human being’s essential dignity formed her basis for resisting Nazi ideology.

In spring 1940, the secondary school graduated her. The subject of her essay was, “The Hand that Moved the Cradle, Moved the World”. Being fond of children, she became a kindergarten teacher at the Frobel Institute in Ulm-Soflingen. She also had chosen this kindergarten job hoping that it would be recognized as an alternative service to Reichsarbeitsdienst (National Labor Service), a prerequisite to be admitted to the university. This was not the case, though, and in spring 1941 she began a six-month stint in the auxiliary war service as a nursery teacher in Blumberg. The military-like regimen of the Labor Service caused her to think very hard about the political situation as well as to begin practicing passive resistance.

After her six months in the National Labor Service, in May 1942, she enrolled at the University of Munich as a student of biology and philosophy. Her brother Hans, who was studying medicine there, introduced her to his friends. Although this group of friends eventually was known for their political views, they initially were drawn together by a shared love of art, music, literature, philosophy, and theology. Hiking in the mountains, skiing, and swimming were also of importance to them. They often attended concerts, plays, and lectures together.

August 24, 1759 William Wilberforce was an English politician, philanthropist, and a leader of the movement to abolish the slave... read more