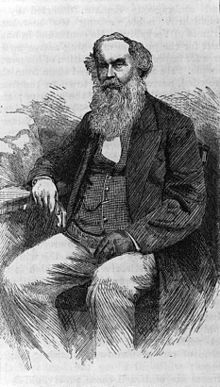 In 1833 he took over his father’s business and within twenty years had expanded it to be the largest employer in Bradford. In 1848 Titus Salt became mayor of Bradford. Smoke and pollution emanated from mills and factory chimneys and Salt tried unsuccessfully to clean up the pollution using a device called the Rodda Smoke Burner. Around 1850, he decided to build a mill large enough to consolidate his textile manufacture in one place, but he “did not like to be a party to increasing that already over-crowded borough”,and bought land three miles from the town in Shipley next to the River Aire, the Leeds and Liverpool Canal and the Midland Railway and began building in 1851. He opened it with a grand banquet on his 50th birthday, 20 September 1853, and set about building houses, bathhouses, an institute, hospital, almshouses and churches, that make up the model village of Saltaire. He built the Congregational church which is now Saltaire United Reformed Church, at his own expense in 1858-59, and donated the land on which the Wesleyan Chapel was built by public subscription in 1866-68.

Salt was a private man, and left no written statement of his purposes in creating Saltaire; but he told Lord Harewood at the opening that he had built the place “to do good and to give his sons employment”.It is sometimes suggested that he was teetotal but this is untrue.He did, however forbid ‘beershops’ in Saltaire.In David James’s assessment:

“Salt’s motives in building Saltaire remain obscure. They seem to have been a mixture of sound economics, Christian duty, and a desire to have effective control over his workforce. There were economic reasons for moving out of Bradford, and the village did provide him with an amenable, handpicked workforce. Yet Salt was deeply religious and sincerely believed that, by creating an environment where people could lead healthy, virtuous, godly lives, he was doing God’s work. Perhaps, also, diffident and inarticulate as he was, the village may have been a way of demonstrating the extent of his wealth and power. Lastly, he may also have seen it as a means of establishing an industrial dynasty to match the landed estates of his Bradford contemporaries. However, Saltaire provided no real solution to the relationship between employer and worker. Its small size, healthy site, and comparative isolation provided an escape rather than an answer to the problems of urban industrial society.”

Salt was Chief Constable of Bradford before its incorporation as a borough in 1847, and afterwards a senior alderman. He was the second mayor, in office from 1848-49, and was later Deputy Lieutenant for the West Riding of Yorkshire. In 1857 he was President of the Bradford Chamber of Commerce, and served as Liberal Member of Parliament for Bradford from 1859 until he retired through ill health on 1 February 1861.In 1869 he was created a Baronet, of Saltaire in the County of York.

He died at Crow Nest, Lightcliffe, near Halifax in 1876 and was buried at Saltaire Congregational Church. “Estimates vary, but the number of people lining the route probably exceeded 100,000”.