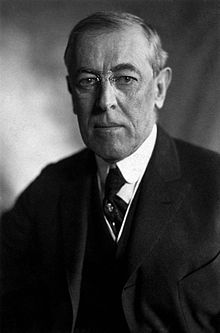 Thomas Woodrow Wilson was the 28th President of the United States, in office from 1913 to 1921. A leader of the Progressive Movement, he served as President of Princeton University from 1902 to 1910, and then as the Governor of New Jersey from 1911 to 1913. With the Republican Party split in 1912, he led his Democratic Party to control both the White House and Congress for the first time in nearly two decades.

In his first term as President, Wilson persuaded a Democratic Congress to pass a legislative agenda that few presidents have equaled, remaining unmatched up until the New Deal in 1933.This agenda included the Federal Reserve Act, Federal Trade Commission Act, the Clayton Antitrust Act, the Federal Farm Loan Act and an income tax. Child labor was curtailed by the Keating Owen Act of 1916, but the U.S. Supreme Court declared it unconstitutional in 1918. Wilson also had Congress pass the Adamson Act, which imposed an 8 hour workday for railroads.Although considered a modern liberal visionary giant as President, Wilson was “deeply racist in his thoughts and politics” and his administration racially segregated federal employees and the Navy.

Narrowly re-elected in 1916 around the slogan, “He kept us out of war”, Wilson’s second term was dominated by American entry into World War I. While American non-interventionist sentiment was strong, American neutrality was challenged in early 1917 when the German Empire began unrestricted submarine warfare despite repeated strong warnings and tried to enlist Mexico to attack the U.S. In April 1917, Wilson asked Congress to declare war in order to make “the world safe for democracy.” During the war, Wilson focused on diplomacy and financial considerations, leaving the waging of the war itself primarily in the hands of the Army. On the home front in 1917, he began the United States’ first draft since the American Civil War; borrowed billions of dollars in war funding through the newly established Federal Reserve Bank and Liberty Bonds; set up the War Industries Board; promoted labor union cooperation; supervised agriculture and food production through the Lever Act; took over control of the railroads; and gave a well-known Flag Day speech that fueled the wave of anti-German sentiment sweeping the country.Wilson also suppressed anti-war movements with the Espionage Act of 1917 and the Sedition Act of 1918, a crackdown which broadened and intensified to include real and suspected anarchists and communists during First Red Scare of 1919-1920. After years of opposition, Wilson was pressured to change his position on women’s suffrage in 1918, which he advocated as a war measure.

In the late stages of the war, Wilson took personal control of negotiations with Germany, including the armistice. In 1918, he issued his Fourteen Points, his view of a post-war world that could avoid another terrible conflict. In 1919, he went to Paris to add the formation of a League of Nations to the Treaty of Versailles, with special attention on creating new nations out of defunct empires. During an intense fight with Henry Cabot Lodge and the Republican-controlled Senate over giving the League of Nations power to force the U.S. into a war, Wilson suffered a severe stroke that left his wife largely in control of the White House until he left office in March 1921. Despite his poor health, he was able to block any compromises that would enable the Senate to ratify the Treaty of Versailles, and attempted to run for a third term. No leading Democrat wanted Wilson to run again-he was still bedridden, and growing increasingly unpopular amid isolationist backlash against the League and a postwar depression. The Democrats were further weakened in 1920 by the defection of traditional Irish and German Democrats over Wilson’s war policies, and the slowness of Wilson to embrace women’s suffrage in comparison to Republican candidate Warren G. Harding. With Wilson unpopular, Harding promised a “a return to normalcy” and was elected in an unprecedented popular vote landslide in 1920.Wilson was too ill to leave Washington when his term ended, and he died there in 1924.